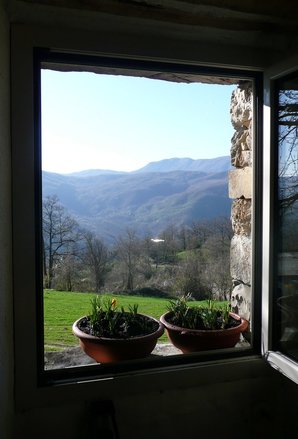 I’m trying to feel forgiveness father, for they know not what they do. But these minds, so far from the real, they have no vision beyond the horizon of their own stories and beliefs. They do not have eyes to see the world is not flat; they only see top or bottom, left or right. They cannot see the content of a man’s character. And I feel numb under a full moon that seems to cast more shadows than light.

I feel so alone now, for my house is as you said, no common comprehension, thrown asunder by un-common “facts” claiming blatant untruth. What can possibly be true on this babel, this globe where unseeing prevails and words are flung like pinballs, bouncing and crashing, never making real contact?

“I have cast fire upon the world, and look, I’m guarding it until it blazes.”* I trust that you are guarding the world, here is the blaze you have set upon it. I feel like Joan of Arc with the flames following her “as she went riding in the dark.”†

Is truth draining from the world in favor of delusion, born of manipulated statistics, foreign objects hurling insults and blame. There is a hut in the forest in my heart calling me away from words. Inviting me to commune with the trees and the bears, and all that does not lie.

Tonight Leonard, my pen turns to fog under the silver moon. I can’t find it in me to say a little more and I feel to go with you where love goes on and on.