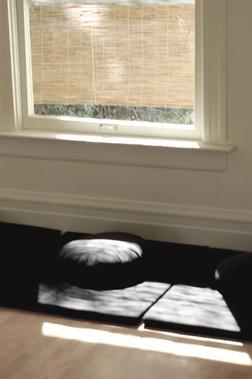 I wasn’t Jesus today, but I may have put a couple stitches into the hem of the sleeve of St. Francis.

When I was a little child I had a vision. My family had returned to the States from Israel where I’d been born. We were seemingly a regular Jewish American family. Yet that afternoon, as I walked alone on the sidewalk by our tract house in the San Fernando Valley I asked myself, “how should I live this life?”

The answer came, try to live as much like Jesus as you can. It seemed a normal interior dialog to me. Only when I was much older did I realize it might have been a bit unusual. I mean, comparatively speaking. I’ve remembered and forgotten throughout my life that sage advice from who knows who, about how to live.

Today I went to the bank to consult with their loan counselor about consolidating my rapidly overwhelming debt. Due to family circumstances and my own lack of savvy with money I began to feel that I was getting into dangerous territory vis-à-vis credit cards.

I had a pleasant exchange with the loan counselor who was sympathetic personally but only had a slim piece of temporary help. I told her I’d have to sleep on it. That was always my father’s solution when confronted with something that was baffling and needed a right decision.

I left the bank and decided to walk next door to see a friend who works in the doctor’s office of Family Practice. We chatted about our problems in her quiet cubicle—I would not want to exchange mine for hers—and then a patient came to her desk with a red plastic card that indicated something she needed to do on the computer for him. So I said goodbye and gave her a hug.

When I turned around, the gentleman, a stranger to me, humorously had his arms out waiting for his hug. We all three chuckled. For a brief instant I felt the instinct to give him a hug. And then the thought rushed in, he’s at the doctor, maybe he has something contagious, I don’t want his problems either. That all came in the flash of a smile, and I departed.

Later, as I drove home I realized that refraining from extending a universal loving hug to that man was not what Jesus would have done. He would have hugged the man even if he had been a leper with open puss dripping wounds. I didn’t reprimand myself. Only witnessed where I’m falling short of my original mandate.

But before I realized I had not lived up to being like Jesus today I had another moment of Witness. I’d been steeped in the thought of less- than-enough all morning—debt and how to pay it off when all my current income will cover is food, rent, and just barely Yoga class. Perhaps you, dear reader, have also experienced times like this. But for a moment—like clouds clearing and letting the sun shine through—walking into the hardware store to buy a new flapper for my toilet (OK there is a tiny bit of expendable income), I felt I have plenty. I’d scanned my mind to see if I needed to stop at the market and realized I had enough food at home and all I needed money for was to fix the toilet. Truly, like you beloved St. Francis, I have all I need. The shiny new patio chairs were not something I needed to wrap my consciousness around, nor did I have a desire for new clothes, or shoes, or any other sort of material goodies which only really serve to distract my attention from focusing on that which is sacred and holy to my soul’s purpose here on Earth in this life—to try to live as much like Jesus as I can.