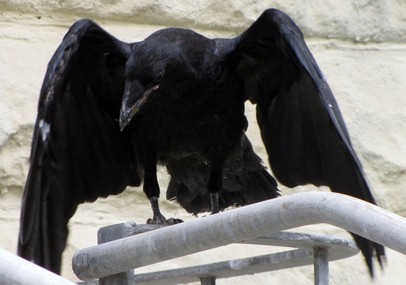 A wild rabbit has been nibbling at the weeds at my front porch. Soon, I thought, the meager winter fare will be gone, most of it buried under a few inches of snow. So I bought some Sweet Grass Timothy Hay for her and put it out in clumps. A friend sent me a quote about rabbits in a list of quotes on a site called Daily Zen, but the quote that snared me in that list was not the one about rabbits. During this Solstice season, with all the socializing and celebrations, I have done very little celebrating. I’ve spent the cold short days and long icy nights in hibernation with no verve for life, feeling lost from the world, wondering if I am coming to the end of my life or simply depressed. The quote that spoke to me was, “I now know that some people feel unhappiness the way others love: privately, intensely, and without recourse.” ~  Khaled Hosseini

Yes, I have felt this kind of unhappiness, deeply and privately—a sense that there is no future for me, and perhaps not even a future for the world. A sense that there is no recourse, nothing to be done, nothing to imagine doing. I tried to force myself to go to a night-before-New Year’s party but my inner voice shouted, “I don’t want to go to the party,” like an obstinate child. I quit trying to force her.

The following day, New Year’s Eve day, I decided to go to a restorative Yoga class. For this I had the energy to venture out of my solitary hibernation. The loading on of layers of clothing, bracing for 28˚, having to warm up the car, did not feel burdensome as had been attempting to go to that party.

During the final pose of the Yoga class, in which my body was riddled with pain, despite the long relaxing poses, breathing deeply and with awareness, I began to imagine I was dying. What if all this pain is cancer? What if, like a friend who recently found out she had stomach cancer and was dead in four days, I will be dead soon. If I find out this is cancer I will write my family and friends. I will tell them I simply don’t have the desire to fight, to suffer through chemo and doctors and hospitals. I am saying goodbye. I don’t mind dying. I don’t know what happens at death or after death. If I am simply in another dimension, the same dimension in which you will be when you die, then I’ll see you there. If I dissolve completely into non-existence, what is there to fear? I’m not afraid of non-existence. I bid you all farewell.

Coming out of my internal address I noticed the teacher talking about surrendering, dissolving, letting go, dying from our ideas of clinging to self. As the class ended, I felt renewed, reborn. It was subtle but there was definitely a shift from that “private unhappiness with no recourse.” I began to feel small buds of possibilities sprout in my being.

Driving home the sight of a large raven sitting on a fence post sent a wave of meaning through me. I wasn’t sure if this was an omen or just a raven, but it felt momentous. Though these birds live here in Northern New Mexico and I see them often, seeing this one here, now, on the post had a numinous quality to it. As I wondered if this bird were truly an omen, I noticed a road sign I’d never noticed before, despite driving past this corner almost daily—Raven Road. Robert Moss, the dream teacher says, “Synchronicity is when the universe gets personal.” It was the synchronicity that showed me the raven on the post was indeed the totemic medicine I’d imagined it might be.

Was it Einstein, or Ram Das, or an old Jewish proverb that said, “Either everything is meaningful or nothing is.” Coming through a period where meaning seemed to be frozen in extinction, I choose “everything is meaningful,” even these times of descent wherein no light can be found.
If nothing means anything one might simply say how could the sight of a raven on a fence post have any meaning? The bird is so common in this area. But seen from the perspective that everything has meaning, one might say, this area has abundant raven energy/medicine. This is a territory wherein “Introspection, Courage, Self-knowledge, Magic, Creation, Rebirth, Omens, transformation of challenges into blessings, rebirth without fear, renewal, comfort with self, honoring ancestors, connection to the Crone, divination, change in consciousness,”* is taking place. Ask anyone who has moved to Northern New Mexico from another kind of life and they will probably tell you these are all the qualities that called them to this place.

I live within the diffuse magnitude of these qualities, so when a single raven appears to me it is meaning showing me to come to a locus of attention to these attributes. As I return from the netherworld of private unhappiness these are the powers I return to and through.

I looked up the totemic meaning of Raven. “You are more powerful than you think you are. Believe and have faith!” ~ Raven
“If Raven has come visiting you . . . you are reminded that those around you are reflecting back at you the things you most have to learn about yourself.”*

The reflection I’ve been receiving for the past year is one of Death. I witness my 92-year-old parents at the end of their lives, my mother with dementia. I have been giving spiritual counsel to a friend in hospice, her mind as bright as ever, her body unable to speak or eat or move. My life has been steeped in the world of caregivers, and the dying process, with all its trials, fears, unpleasantness, bodily mess, as well as those moments of spiritual bliss.

“Know that when Raven appears that magic is imminent. Raven is about rebirth, recovery, renewal, recycling and certainly reflection and healing. He signifies moving through transitions smoothly by casting light into the darkness.”*

Looking at end of life and the dying process I come to a personal renewal. I see the fear when one is not spiritually prepared for death. I know I must learn to prepare for it myself.

“If Raven is your Totem animal you have no fear of the dark, or the underworld and understand that there is a divine balance between the light and the dark. You find comfort in solitude and enjoy your own company. Raven seeks stillness and quiet, and prefers it to the constant onslaught of chatter and noise in our daily lives. You are wise and often are used as a messenger for others.  The spirit world uses you as a bridge to the physical world to bring forth its messages.”*

When my friend in hospice asked me, “how do I die?” I didn’t really know how to answer. I replied, “I think you just have to let go.”
“When Raven comes flying in your dreams he is letting you know that a change of consciousness is imminent.” Is death a change of consciousness or the end of consciousness? I don’t know. But one thing I do know, we have no choice in the matter of dying; it is inevitable. So whatever it is, I’m confident that letting go to it is the royal road.

The sight of the raven returned me to “everything is meaningful,” even the dull private unhappiness that comes at the darkest coldest time of year—that small death that teaches us to prepare for the final death to which we all will go.

And what of the rabbit? I walked out onto the porch this morning, not noticing the rabbit munching on the sweet hay I’d put out for her. She took one hop when she saw me and then stopped. We watched each other for a full minute before she hopped away into the sage at the back of the yard. I felt a trust between us. I felt she knew I meant her no harm.

Rabbit “Reminds us to examine and utilize the tools we have within ourselves. Although our instincts are innate, they also need nurturing and development.”

Today, January 1, 2015 I woke up with a continued sense of renewal. I went to my altar, which had been neglected for some weeks now, and gave it attention. I lit the old candles to burn out the old year and lit new candles to welcome in the new. I set some intentions for the New Year—to bring my life back to a ceremonial context; to rally around focused intentions. As with the raven energy that is part of the character of the place where I live, my spirit can also be a diffuse ambiance of my life. And like the raven on the fence post my spirit can emerge from that atmosphere with laser attention/application.

Death falls toward the dissolution of manifest thingness. As I return to the living I come from that diffusion, non-expression, to the more explicit. Rabbit  “may also indicate a need for more planning or to check those plans already set in motion.” No need for plans in death, but life requires that we relate to identifiable things. That we bring the diffuseness into focus.

Looking out the window now I catch a quick glimpse of two ravens riding the wind. I am aware of both the motion of wind with its boundary-less currents, and the discrete feathers, muscles, beaks of the ravens. I dance between the diffuseness and the distinct even as I move between the upper worlds and the netherworlds.